Taste of Race Culture in Firenze, at their very first visit 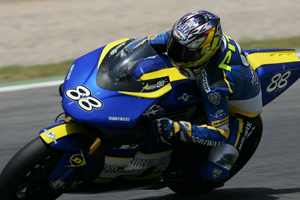 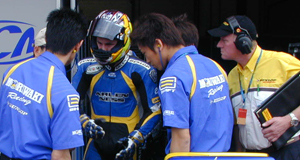 May 31, mechanics and staffs of MORIWAKI flew to Italy. It was the start of their entry to European rounds. Rented a cottage in Firenze and cooked own meals. Went to a supermarket to get some food. The Ducati MotoGP racer, Desmosedici was displayed at the supermarket. They couldn’t believe their eyes when they saw some ordinary housewives looked at the Ducati curiously. “Motorcycle race” is a part of their every day life there. MORIWAKI staffs felt difference in the culture.

The machine was loaded, assembled, given basic set up and ready to run in Mugello circuit for its first time. Ground was bumpy and many sections require quick-term motion while you going down a hill. “We wanted to test our machine at a high demanding circuit. We wanted to see how far we could go with the machine we developed.” Moriwaki was watching Pitt going around the circuit. 4hours session before the final race, 4hours session to optimize the machine setting.

On the qualifying session day1, MD211VF started with 1min58sec and reduced its lap time to 1min55sec, 5sec behind the top. But the machine marked 317km/h, breaking own speed record. It was faster than Kawasaki works racer. Finished the 1st qualifying session in 23rd out of 23 entries. On day2, Pitt showed his aggressiveness but missed his shifting at very last time trial. Without the mistake, Pitt could definitely pass 1min54sec line. He finished his qualifying session in 22nd position with 1min54.9sec.

On June 6, Final race. The sky was clear from the morning. MORIWAKI’s 2004 MotoGP races had finally started. Locals were cheering MORIWAKI, saying “Giapponese!” Pitt was struggling with chattering but gaining his position up to 19th at middle stage.

Toward the end of the race, clouds were moving in and it started raining 5 laps before the end of the race. “Red flag”. All the sudden, every pit got hectic. 6-lap race was scheduled to finish the final. Only 5 minutes to restart the race. MORIWAKI’s pit was like a battlefield. “Rain tire or Slick?” Put rain tires on T-car and replaced the main machine’s tires to fresh slicks. MORIWAKI had only 3 mechanics to do all these works including refueling of the machine.

The second heat started. MD211VF position was 16th out of 17. Pitt made superb start, took over 2 opponents, grabbing 14th position. It was a point winning position. Rain got heavier at some point while he was managing to keep that position. But insufficient fuel supply occurred at last 2 laps and he finished in 17th.

“It wasn’t a quiet race but I am pleased that we finished it without any crash. We spent last year to develop a GP machine. This year, we have to accomplish certain level of result in the races. For that reason, races like today are very essential. We found many of our problems which we could never notice from our testing.” MORIWAKI finished their debut in Europe.