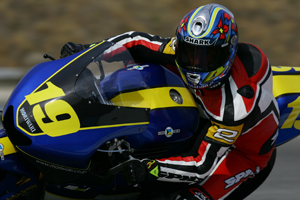 A rider had a test ride on MD211VF a day after the Brno GP. Olivier Jacque, who won 2000 WGP250 championship after making historical competition with Shinya Nakano. Jacque got on the MD and marked an almost top lap time of previous day race.

Moreover, Jacque’s comment after his riding impressed Moriwaki. He could give accurate information “when, which part of machine, create problem, in which way”. World champion rider is beyond our imagination. Moriwaki decided to use Jacque who wanted to enter the Motegi GP. MORIWAKI already knew that they could enter forthcoming Motegi GP as same way as they did at Suzuka last year, taking one of WCM seat. Jacque joined the team from Sepang test. His precise comments helped to accelerate MD211VF development rapidly.