Final round of 2004 season; Disappointing Valenciar 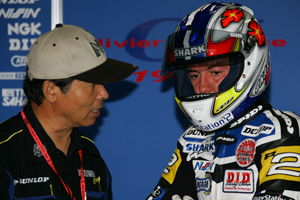 The last Sunday of October. Valenciar was having MotoGP final round of 2004. MORIWAKI passed originally scheduled entry of Malaysia GP and Australia GP and entered Valenciar, Spain GP, instead. After making the unexpected result at Motegi, MORIWAKI decided to try increasing the potential of MD211VF with help of Olivier Jacque, and take a chance at the final round. They were ready.

But what we saw in the race was unbelievable. Jacque became more than 1 lap behind the leader. And a few laps later, he brought the MD211VF to their pit. Retired.

Tires were losing grips rapidly. It could be because of low μ of Valenciar ground, or perhaps the enormous power of Honda 5-cylinder engine.

“But Jacque didn’t retired right away. He kept riding to obtain necessary data. He said it was like riding on ice.”
They retired the race because they decided that they had obtained enough data to analyze root cause of the problem. And data was very valuable for the team.