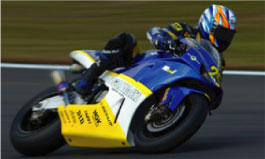 It quickly marked 2min8sec at Suzuka. Serizawa said, “I could open the throttle without any worries when I was coming out of last corner of Suzuka”. MORIWAKI knew it. Next challenge was to improve its turning ability while assuring the stability. Just like that. MD211VF was modified and evolved almost every month. Not long after the #3, #4 was completed. The difference in frame dimension between those 2 versions was very limited, however, they had totally different characteristic. The experience of Suzuka 8hours Endurance in that year also brought improvement in rear suspension response.

On October 3, qualifying session had started. Serizawa kept coming back to MORIWAKI’s pit after every 2 to 3 laps. Mechanics were busy changing tires. They could not find a right set of tires.
Serizawa was finished in 23rd at the qualifying session. Difference from the top, Max Biaggi was 3.212sec. Top speed of MD211VF was 269.7km/h whereas Nicky Hayden was marking 286.2km/h with his HONDA RC211V.
The difference was clear.

“This is reality. I was expected, though, I thought we could reach 50s second.” Moriwaki said. But Serizawa had never even had chance to do his time trial. He was busy finding a set of tires for the final race. This kind of activity should have been finished long ago. Race teams usually have certain level of understanding what kind of tires should be used depends on race condition.

However, there was no time for MORIWAKI and DUNLOP. Serizawa finished in 19th position at the final race. He was favoring the tires all through the race. His position later moved up to 18th due to a penalty of other team. “Serizawa was being patient. Tires already worn out before the last 10laps. And he still managed to bring the bike to finish line. I was grateful for what he has done, but Serizawa and we could never satisfy ourselves with the result”. MORIWAKI is not going to be happy for just being in MotoGP anymore.