2004 season had arrived. Going to Europe. 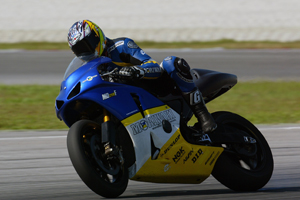 During the off-season, one big contract was made. MORIWAKI became a development team for DUNLOP tires. DUNLOP supplied their tires to Kawasaki in 2003 but they chose MORIWAKI for their development. As an outcome of the contract, MORIWAKI flew to Sepang, Malaysia before the 2004 season to test tires under hot and humid severe condition. MORIWAKI was making a step toward wildcard-entry in European rounds.

MORIWAKI had a new rider for their 2004 season. It was Andrew Pitt, the last year Kawasaki GP rider. He showed his world grand prix class performance, opened the throttle heartily. MORIWAKI wanted to bring up their rider in long term. But Moriwaki said, “MD211VF is not ready to bring up any riders. It still needs to be brought up by a rider. But we cannot sacrifice a rider to develop the machine. We needed someone who has been to European circuits to compete in our first experience of MotoGP European rounds.” It was already MD211VF#6, making same lap time as pervious year Yamaha works team.

3 of RC211V engines were rented by Honda. MORIWAKI could rotate those 3 engines between “actual race”, “spare machine” and “maintenance”. Carbon fiber cowling from Italian CARBON DREAM was also ready. In that year, Suzuka was no longer in the MotoGP calendar. MORIWAKI’s first appearance in 2004 MotoGP was in Mugello, Italy, on June 6, followed by Catalunya on June 13. It was different from 2003. MORIWAKI could plan their schedule ahead. They had a time. Tires were repeatedly tested.