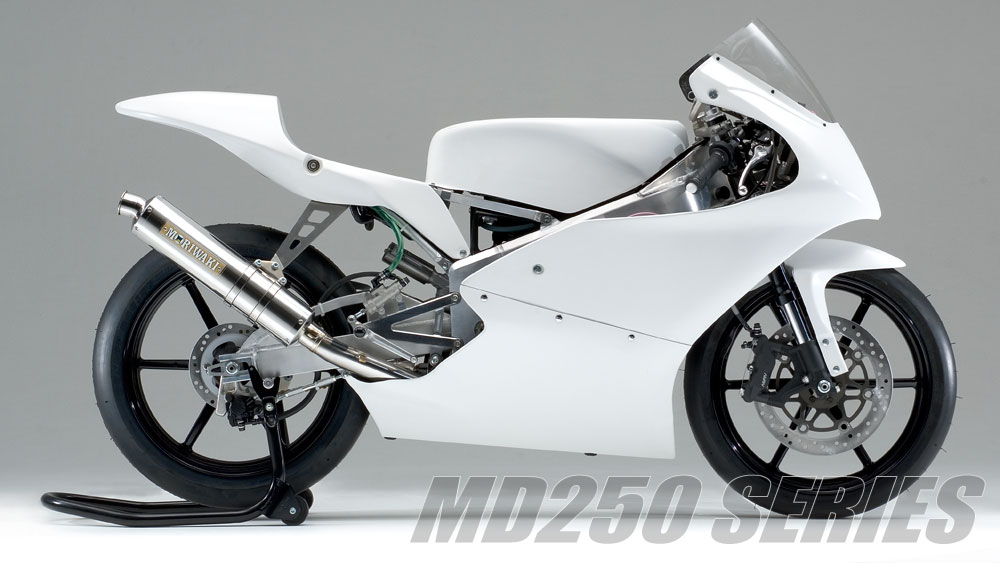 MD250 is 4-stroke 250cc MX engine onboard “the MORIWAKI original” pure racing machine. For Japan, it was designed to enter “GP-MONO” class.
We have been developing competitive racing machine and trying to achieve ultimate objective of this project; broadening the base (youth) of future motorsports population.
“MD” stands for MORIWAKI Dream.
MD211VF, MORIWAKI original MotoGP machine carried MORIWAKI’s dream and challenged the world greatest road racing (2003～2005).
Succeeding its name, dream and sprit, we are continuing our challenge in the new race category, "GP-MONO".

How can the motorcycling be enjoyed by more number of people more easily?
It must be low cost, and somehow it must give everyone an opportunity to improve their riding skill.
MORIWAKI had worried that riders were getting hi-performance machines without skill to control them. So, we created the “MH80R” which gives everyone a pleasure to control.
Now 4-stroke is starting to take over motorcycle race scene. We keep the concept of MH80R and carry on the development and sales of this pure racing machine “MD250 Series”.

Environmental issues have become a key factor in every industry and domestic motorcycle manufacturers have decided to abandon all 2-stroke racing machine production in near future.
Thus, the GP-MONO class was established in 2006 as a part of MFJ All Japan Championship to replace 2-strokes.

At the beginning, entries were building their own race-ready machines with GP125 racer frame and MX engine.
This requires engineering know-how of racing machine production, therefore, only All Japan championship races got many entries, whereas not so many at regional championships, though the class was originally introduced as an entry class.

So, MORIWAKI thought about the situation and came up with an idea that if we provide an environment which makes it easy to participate the class, it will help broadening base (youth) of future motorsports popuration.
At the moment, only HONDA engine onboard “MD250H” is available, however, we are planning to release MD250 with other manufacturers engines when the condition is ready.

The ultimate factor of our reason to start developing MD250 came from MORIWAKI’s engineering aspect. When we observed the GP-MONO series in 2006 season, we were convinced that the GP-MONO machines can safely go fast because their tires’ capacity is higher than their chassis, and that will give less chance of crashing the motorcycle when riders push it too far.
GP-MONO is purely a road racing machine with no compromise in its engineering.
We have operated an enomouse number of tests to find optimum parts and dimension.
Yasutomo Nomura, MORIWAKI Club GP-MONO rider played a main role in the machine development, however, T. Yamaguchi and S. Moriwaki also suported the development activity. As a result, Y. Nomura achieved the 3rd position in All Japan Championship Road Race season ranking in 2007.
Our current MD250H is almost same as the one Nomura rode in the championship. Surely the rider had improved his skill but it clearly showed the potential of the machine which can compete in the top of All Japan series.

One of the features of MD250 is in its chassis design concept. It has a priority on durability rather than cost.
We have to provide our customers something what is worth paying such an amount of money. MORIWAKI thinks it is important to obtain its performance to stay in top level of its class for long period of time, and should not require much cost to continue participating races.

“Winning the race” is very important factor. But we think “Enjoying the motorsports” is also important.
We have traveled to Europe several times to participate the MotoGP with our MD211VF, and what we saw was enormous difference in people’s passion toward motorsports. Everyone from kids and elderly, men and women were really enjoying the race. Every circuit was packed with people. What about Japan? We have 4 major motorcycle manufacturers and yet, it’s not even close to what it is in European countries. Isn’t it frustrating? But also we don’t see any reason why the motorsports doesn’t get big in Japan. It’s possible but MORIWAKI cannot make it happen alone. We are hoping to share the joy of motorsports with more and more people through this MD Series. MD250 can be a machine just to provide “joy”.
If we can give anyone an opportunity to become a GP rider with MD… that would be perfect.

MORIWAKI used to produce “MH80R”, GP80 road racer with HONDA NS-1 chassis and CR80 MX engine.
There were 2 major concepts in MH80R. 1. It must have a reasonable price so more people can experience the machine, and 2. It must be a good tool to improve riding skill.
MORIWAKI chose a standard street bike frame and 80cc 2-stroke engine to achieve low cost. HONDA genuine parts are also intentionally used instead of special made racing parts.

It was because of its cost but also to restrict its performance. The “restricted performance” machine requires riders to understand the machine behavior and engine characteristics to run fast. When riders think while they ride and try to improve, they will be able to build up riding skill inevitably.
Many riders would be confused at their first experience with MH80R and thinking why this bike doesn’t stop, grip or turn. But soon they will realize importance of its strange characteristic as they continue riding it. Riders need to control the bike certainly… in other words, “It’s a great tool to correct bad riding habit and improve riding style.”

It is easy to see importance of having such motorcycle by counting numbers of riders in the history of WGP and WSB who once trained with MH80R, and the bike is still used for that purpose in recent years. 。