Introduction of "MotoGP moto2 class" was announced in June 2008. GP Commission (Decision making body of Grand Prix consisting of representatives of DORNA, IRTA MSMA and FIM) approved to have the moto2 class to replace 250GP class. The moto2 class is totally new 600cc middle size race category in this 4-stroke demanding era.
At that point, the regulation was to use production engine (later it was changed to one-make spec class) with frame, swingarm and suspensions that are developed by chassis constructors in order to cut down the machine cost. So it's easier to enter the class.
The moto2 class was going to be one of support classes of MotoGP World Championship, and it was also expected to be introduced to regional level international races.
In Japan, moto2 class machines (prototype ones) were approved to compete in All Japan Championship with 250GP class in 2009.

MORIWAKI saw the new class as a stage for constructors to showcase their performance and great opportunity to challenge the world prominent road race, and decided to actively participate to the class as a machine developer and supplier.

Originally developed frame and specially-made suspensions, MD600 were going to be sold to moto2 class intending teams around the world, and spare parts supply and machine setup supporting system were prepared.
Shogo Moriwaki took a role of the machine development rider.

MORIWAKI started development of prototype machine based on the regulation released in June that year. Just a month later at QTEL FIM World Endurance Championship rd.3, the 31st of Coca Cola Suzuka 8hours Road Race, MORIWAKI revealed the first moto2 proto-machine, led the world in its development.
It attracted media and concerned people attention from in and out of Japan, and made an impact to the world.
FIM staffs made their way to MORIWAKI's pit where the machine was displayed and observed the machine with enthusiasm. MCN, a motorcycle magazine form Europe put a photo of MD600 in their cover page.
The appearance of MD600 had received great response.

MORIWAKI chose chrome-molybdenum truss frame for the first MD600. It is MORIWAKI's specialty and the same concept was used in their MotoGP machine "MD211VF". The truss structure frame is relatively easier to work to change dimensions and optimize of stiffness balance.
FIM regulation for the new coming class did not have fixed specification for the engine at that time, so Honda CBR600RR was installed. However, MORIWAKI was prepared was to have any different engines.

A fine September day, MORIWAKI MD600 appeared at Suzuka Circuit west-course. The machine presented in July finishing work and Shogo Moriwaki took if for its shakedown in front of MORIWAKI mechanic staffs.
Because it was the first test on track, Shogo focused on checking of machine movement and MD600 was lapping without major troubles, providing data at lap after lap. The MORIWAKI original machine had passed all function tests for motorcycle completely. It is an incredible achievement that a totally new design motorcycle runs perfectly at its first run. It is unofficial but MD600 broke the circuit record lap (of ST600) that day.
It was the moment that proved MORIWAKI way.

It was the first time that MD600 was introduced to the world in official MotoGP event. The room was packed with media and concerned people. Their eyes were glued to the machine and their ears concentrated on Mr. Moriwaki's words.
When it was unveiled, it betrayed expectations of many attendances, but in a good way.
MORIWAKI chose to use aluminum frame instead of chrome-molybdenum. There were reasons behind it.
The merit of chrome-molybdenum was that easier to change dimensions and stiffness balance. And it tends to make easier to get good cornering performance because of "bending characteristic" of pipe frames. Despite all this, MORIWAKI chose aluminum, because it can improve precision of mass production. To be consistent in a championship, it is important to improve machine performance, but also it is important to have a machine suited to the rider. In case of a crash or a machine needs to be replaced, it is essential to provide an exact same machine as quick as possible. That is a key point of competing in the championship through a season.

And yet the most distinguish feature of MORIWAKI MD600 is the variable caster angle and swingarm pivot position which were only used in factory race machine. The part of the reasons MORIWAKI decided to introduce such system was to foster riders and race mechanics. Usually, a rider experiences machine setting that involves dimension change first time when he becomes a factory team rider. Not many mechanics will have chance to do it, either. Having such advantage in the machine is one thing, but MORIWAKI also considered needs of increasing the level of riders & mechanics for the future prosperity of road racing. It wouldn't be an exaggeration to say that was the first effort in the motorcycle history.

Already the 9th proto machine was running in September 2009. Repetition of track tests were undertaken to increase competitiveness as much as possible. The number of proto machines was the reflection of machine development work was that covering all aspects of racing motorcycle. The #9 proto MD600 was in Okayama to participate All Japan Championship Road Race round5 in September 2009. Shogo Moriwaki, the MD600 development rider took the machine. 4-stroke 600cc was approved to race in GP250 class as "GP proto" in that year, and surely the Okayama round was drawing attentions. Under the enormous pressure, Moriwaki took the pole position and he won the race with 7 seconds ahead of the runner up.

At following round at Motegi in the series, MD600 appeared again and preformed a "pole to finish" race. The gap to the running up was over 40 seconds. The race result was also presented in MotoGP website and gave an impact to the world. It was the moment that the superiority of our own developed racing machine was proved.

MD600, The machine chosen by the world.

Since the start of the development, various racing teams had approached MORIWAKI. In the end, 7 riders from 5 teams raced in 2010 season. MORIWAKI limited the number of team to 5 to supply MD600 because that is the current capacity to be able to provide sufficient support work to users constantly. 4 out of 5 were going to MotoGP moto2 class and 1 was to Spanish Championship. By the end of 2009, MD600s started their journey to teams in overseas. After received the machine, each teams tested it energetically to prepare for the new category race. MD600 received a high reputation in Europe, the home of motorsports and left those pre-season tests with promising lap times. Expectation for the season was building up.

MotoGP moto2 class, the world premier motorcycle race series started its 2010 season. MD600 already earned its place in the history of the new class from the opening round of the season at Qatar in April.
Toin Elias, Gresini Racing Moto2 team took the very first pole position in the class despite the injury he had from pre-season test. He was the only one passed 2min2sec mark.
The race was very competitive and fierce battles were seen from the beginning. Toni Elias finished in 4th ahead of other MD600 riders. Thomas Luthi, Interwetten Moriwaki Moto2 marked the course record time, and all 6 MD600 riders competed the race.
The following week, a MD600 appeared at Spanish Championship with Team Andalucia and got in 3rd-podium finish. MD600 kept its momentum in the MotoGP moto2 class, and Toni Elias won the Spain GP followed by Thomas Luthi in 3rd. Elias also won the following round in France and he was leading the championship race. 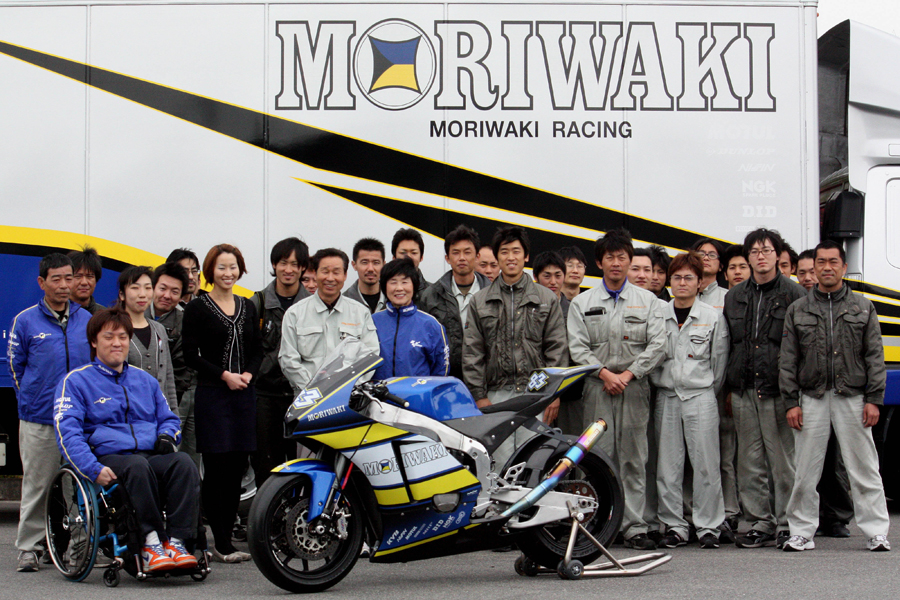 MORIWAKI Dream for years to come.

MD600, carrying MORIWAKI's dream, has left to the world of road racing and started making its history.
In the past, MORIWAKI developed MD211VF, an original MotoGP machine with Honda RC211V engine; HRC 5 cylinder V engine after the WGP changed to 4-stroke 990cc in 2001. MORIWAKI challenged the world prominent motorcycle race from 2003. The first appearance was at the opening round in Suzuka. MD211VF prototype machine entered the race as a wildcard. In 2004 at CatalunyaGP, MD211VF finished in 14th, gained the first MotoGP point. Only 20 months after MORIWAKI announced its plan to challenge the MotoGP, and it was only 4th race since the Suzuka debut.

The world praised the private team's great accomplishment.
Some said it's a reckless challenge when announced our participation in the MotoGP. But we wanted to verify our capacity by running our own machine with the most powerful engine in the Grand Prix history. We had achieved that objective when we got the championship point.
Now, our objective was achieved as we reached the top of the world, by Toni Elias's 2010 Moto2 world champion series with the machine we designed from noting except the engine.
The machine we created with our road racing technology that in nearly 40years, the machines, "MORIWAKI MD600"
However, "MORIWAKI DREAM" will never end and keep developing for more ideal machine than ever.